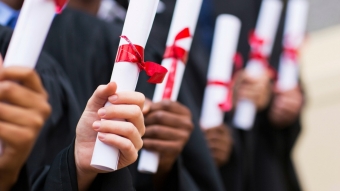 It’s the minister of finance who rises on the floor of the legislature every year at 4 p.m. on budget day to read the government’s fiscal plan for the upcoming year. But, of course, it ultimately takes a cast of thousands to write the budget. What starts as the germ of an idea needs to be studied by the civil service, analyzed and commented on by affected stakeholders, polled to see what the public thinks of the idea, and gone over with a fine-tooth comb by the premier and her staff to ensure it’s consistent with the government’s priorities.

But it always starts with an idea.

The biggest, most ambitious new idea in the Liberals’ 2016-17 budget focuses on post-secondary education. Over the years, governments of all stripes have developed numerous programs totalling hundreds of millions of dollars’ worth of loans, grants and bursaries to encourage young people to go to college or university. But for some reason, many qualified students – most often from low-income homes – declined to avail themselves of these programs and therefore didn’t go for post-secondary education.

Levy, the former president of Ryerson University, has spent most of his adult life championing higher education. He’s led the transformation of Ryerson from a polytechnical institute to a university renowned as an innovation leader that redesigned much of downtown Toronto in the process. (Full disclosure: I’m a visiting professor at Ryerson in the faculty of communication and design).

Levy is now the deputy minister of training, colleges, and universities, trying to continue transforming education from within the public service.

But Levy has never been one to sit in his ivory tower and chew over academic theory. Throughout his career, he’s visited classrooms to see what happens when educational policy meets reality.

To that end, he’s repeatedly visited the high school he himself attended, Downsview Secondary near Keele Street and Wilson Avenue in northwest Toronto. Many students there are from low- income homes and assume a post-secondary education is a dream never to be realized.

Levy was determined to change that. He knew there were plenty of programs in place to help those students pay for college or university. But he also knew the parents of those students almost certainly hadn’t gone past high school, and therefore couldn’t help their kids navigate an increasingly complex system to take advantage of those programs.

So on one of his recent visits, Levy asked the students some simple questions.

“Why don’t you apply to go to college or university?” he’d ask.

“But there are numerous programs to help pay for it. Why don’t you access those?” Levy followed up.

“Too complicated,” came the replies.

Then Levy asked the key question: “What if tuition were free?”

Suddenly, Levy saw students who’d never considered post-secondary as part of their future thinking it could be a reality after all.

That one question changed everything.

And so, after the government did its due diligence, it announced in this year’s budget the creation of a program: the Ontario Student Grant, taking all the money the province was spending on a mishmash of different programs and simplifying things immeasurably, for families whose household income was below $50,000 annually.

In a world where only a high school education is almost never enough to fully participate in society’s opportunities, Levy is convinced thousands of qualified students will now open the door to college or university, because the grant will cover most of their expenses and is simple to get. Furthermore, eligible students won’t be graduating behind the eight-ball, with a mountain of debt to pay off.

The government clearly thinks the policy is a winner, both practically and politically. Premier Kathleen Wynne and Minister of Training, Colleges and Universities Reza Moridi visited Jarvis Collegiate in Toronto on Tuesday to draw further attention to the new grant program. “By making average tuition free for tens of thousands of students and increasing eligibility for support to so many more, we are demonstrating how firmly we believe in the importance of investing in Ontario’s people,” Moridi said in a press release detailing the visit.

While the program will cover the average cost of tuition, the government isn’t covering all expenses related to getting a higher education: food, books, rent and other costs will still be the responsibility of the student. And those who want to attend one of the many programs where the cost of tuition is higher than average will need to make up the difference themselves or apply for additional financial help at their university or college.

It’s highly unusual for a new government policy to be greeted with universal huzzahs, but this one was. Student groups, colleges, universities, and advocates of increased transparency and accountability in government programs all sang the idea’s praises. The opposition rightly asked, what happens if massive numbers of students take advantage of this offer; will the government allocate the dollars to ensure no one is left on the sidelines?

Finance Minister Charles Sousa told reporters in the budget lockup, yes. “We very much hope the program is over-subscribed,” he said. “We want as many people as possible to pursue higher education.”

No single person, except for the premier, can ever take complete credit for the creation of a program. Government is simply too complex these days. But in this case, thousands of students from low-income families will soon go to college or university in large measure because one man got out of his office and asked a spectacular yet obvious question:

“What if tuition were free?”

Not a bad day’s work for one of Ontario’s deputy ministers.

A recording of today's webinar is now available.

Search for a Co-op Program: